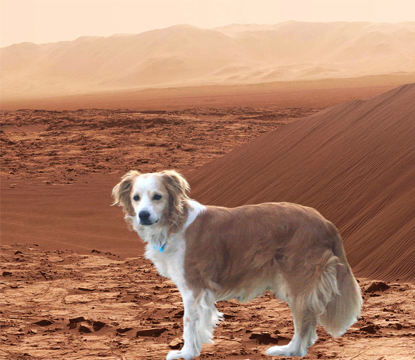 You don’t get more outdoors than Mars! That’s where you’ll find our best four-legged friend Fabio.

More: Fabio has been (mostly) an outdoor dog during his life. Unfortunately, his previous owner chained him in the backyard in Southern California, leaving him exposed to heat and the elements year round. His teeth were worn from chewing on the chain. He was cowering in the corner of a shelter cage when he was surrendered. Today Fabio is playful, loving, and spoiled by his adoptive family. He is now our unofficial mascot on Mars, as his Mom works for NASA’s Jet Propulsion Laboratory.
Vote