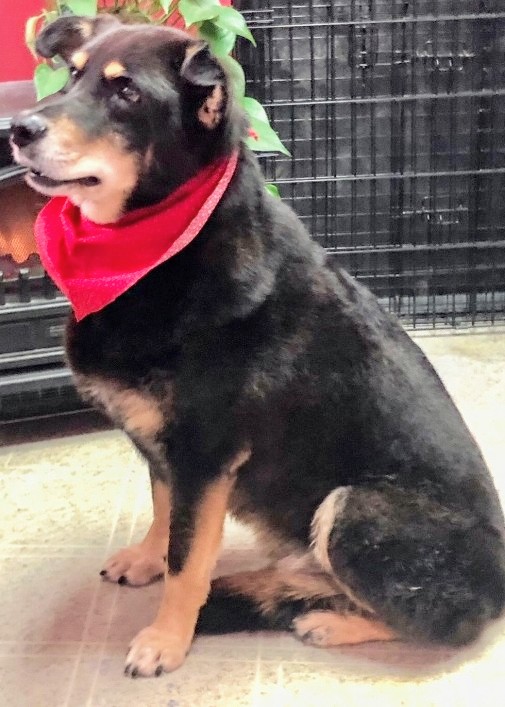 Townley Chase at the Groomers

More: Growing up in Kentucky with the "Rin Tin Tin" bloodline. My mother's German Shepard's originated from Germany. At age 16, I ended the "Rin Tin Tin" bloodline. As an adult I started rescuing dogs, 55+ pounds, any mix, any breed. I found Windsor Townley Chase is a field down by the James River in December. His neck was bare. Five inches wide, all the way around his next, there was no hair and the crown of his head was scared. He was a great distance away from him. I got out of my neighbors pick up truck with water, boxes of Milk-Bones, a water bowl, a leash and a harnash. Mr. Haney, my neighbor owed several farms. His river farm is where he grew his hay for his cows and his race horses. Mr. Haney had been telling me about this German Shepard that he found in the field, everytime he goes to get hay for the cows and horses. He said, that he see's the dog, he stops to throw dog food out in the field and then on down to his river farm to get his hay. When he comes up the hill, with a big round bale of hay in the back of his truck, the dog is gone and the crows are in the field eating the dog food. Several weeks had gone by due to my work schedule and it getting dark, with the daylight saving time so early during the month of December in Virginia. I felt guilty night, after night knowing their is a dog out there that needs me. Finally a Saturday morning, Mr. Haney picks me up in his old pick up truck and I am prepared. He drops off in the middle of the road and I see that beautiful German Shepard out in the distance. Barbwire is on the top of the old field fencing that I need to cross over. Carrying my water jug, water bowl, milk-bones, etc I find an small opening in the fence about a quarter mile down the road and I enter into it, I am able to step over the barbwire. I can see from the distance, how bald this German Shepard is around his neck collar. This is something that I have never had seen before. I am having to be on my knees, throwing Milk-Bones to the right of him whistling and making myself as small as possible. He was extremely frightened at the beginning of my sharing of the Milk-Bones. I believe that he thought that I was actually trying to hit him and that I was a actual threat. He would run. I would whistle louder and make myself smaller. Wet grass in the mud on my knees in December. My concern was the welfare of this dog. I started a pattern of tossing more Milk-Bones to the side of him. As he realized that I was sharing food, he would stay in place and eat the Milk-Bones. Everytime Townley Chase had his head lowered, I would try to run quickly forward without him noticing. I kept repeating the whistling, tossing of Milk-Bones and moving forward. He would occasionally look up when I was in the middle of moving forward and I would drop, right on to the ground. Getting closer by the minute, I gently starting speaking to him. Again, ensuring his head was down I was moving in. I finally got close enough to wear I was able to grab him, hug him, give him water. I put a harness on him and sat down next to him pouring out the box of Milk-Bones in the grass. Walking back and making our way back to the opening of the fence, Townley Chase was walking by my side without feeling fear. We made our way through the downed barbed wire stepping out onto a country road in the middle of nowhere, only birds and trees all around. There were no vehicles passing by. Townley & I were just sitting on the side of the road getting to know each other. I had my arms wrapped around him and told him that I will never let go of him and he has nothing to ever fear again. We hear and also see Mr. Haney's old pick up truck coming up the hill, with a big round bail of hay riding on the tailgate. Mr. Haney stops to pick us up. I open the passenger door, bags of horse feed are in the back seat. Townley see's Mr. Haney and starts to act extremely upset and wanting to get away. Mr. Haney tells me to hand him the leash, as Mr. Haney is pulling Townley Chase into the passenger side of the truck, I am lifting and pushing him into the front seat of the truck. Townley ends up sitting in the middle of the console in this old farm truck and off we went. Townley starts to be content, his nervousness is slowing down. Mr. Haney pulled into my eleven acre property to drop us both off and that was the beginning of one of my greatest days. I made a promise to Mr. Windsor Townley Chase that I would always be there for him and of course, his other brothers and sisters. I stopped going to visit with the race horses and spent the time loving on Townley Chase, his sisters and brothers. Dogs are a blessing. Dogs give us life, they give us joy, they know right from wrong and they know that we love them as the day is long. They know our thoughts telepathically, they can see our visions, they know our dreams...
Vote